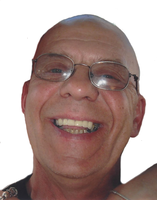 Edward L. "Edziu" Jezierski, age 68, of Webster died Wednesday March 24, 2021 at UMASS Memorial Medical Center after a battle with Covid-19 . Edward was born October 28, 1952 in Webster, MA. He is the son of the late Edward L. and the late Margaret (Beresik) Jezierski. Edziu worked many years for Kokocinski Plumbing in Webster before opening his own business. He also formerly served as the lieutenant of the Webster Fire Department. Edziu enjoyed his daily stop at Dippin Donuts, flying model planes, driving his Jeep and caring for his koi pond. He loved his chihuahuas, especially his best friend, Puck. He was always smiling and made friends everywhere he went. He also gained many loyal customers over the course of his career. He is survived by his wife, Melissa (Pederson) Jezierski; daughter, Krystie and her wife, Cheri Jezierski of Lakewood, CA; daughter Katy and her husband, Przemyslaw Staszek of Dudley, MA; step-son, Keith Hubert of Worcester, MA; step-son Joshua Hubert of Oakland, CA; two grandsons, Noah and Niko, and several nieces, nephews and loyal friends. He is preceded in death by his sister, Linda Wisnewski, and brother, James Jezierski. In keeping with his wishes, services after cremation are private. In lieu of flowers, donations may be made to the ASPCA. Bartel Funeral Home & Chapel 33 Schofield Avenue Dudley is in care of arrangements. www.bartelfuneralhome.com for his guestbook . . . .