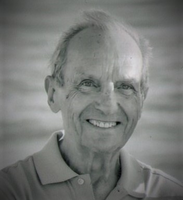 Normand Joseph Richard was born in Mexico, Maine on April 16, 1929. He was the 10th of 14 children born to Camille and Leonie (Thibodeau) Richard. As often happens in large families, Normand proved his mettle in keeping up with his older siblings. He grew up climbing trees, jumping from one treetop to the next, ski jumping in rudimentary skis strapped to his boots, and teaching himself to swim in the nearby river. His survival to adulthood is attributed to his mother's devout prayers. The family later moved to Worcester, MA where Normand attended Holy Name and Assumption Prep. At age 17, Normand began work at New England Power Service Company and remained there until his retirement at age 62. His early years spent climbing trees prepared him well for his job as a lineman for the power company. He earned the respect of his supervisors and colleagues for always putting in a good day's work and treating people fairly. He wouldn't ask you to do something that he wouldn't do himself. Normand spent 45 years travelling throughout New England as a lineman and general foreman. During the Korean War, Normand served for two years in the US Army, training linemen at Camp Drum in NY and achieving the rank of Staff Sargent. In 1954 Normand married his sweetheart, Elaine Baril, in Worcester. They began their life together in Worcester, but soon moved to Oxford to raise their three sons – Marc, Ray and Michael. He taught his sons how to play baseball, ride a bike, swim, fish, and fix just about anything. When you hit a roadblock, you didn't give up, you continued working the problem. And as a last resort, you just might need to read the instructions. Normand and Elaine's boys were blessed with a very happy childhood, surrounded by love and attention (although Normand did have a knack for embarrassing them in front of girls). After the boys grew up, Normand and Elaine moved to Dudley where they lived on the hill for 43 years. In retirement, Normand filled his days with golfing, gardening, woodworking and building projects, and spending time with his precious grandchildren and great grandchildren. He was, after all, a child at heart. He loved telling jokes, teasing and playing tricks -- anything to make you laugh. A day with Grampy and Grammy was sure to be fun. Normand and Elaine spent 30 winters in Naples, FL where they made new friends and Normand took up bocce. He had been a trophy-winning candlepin bowler in his younger days and was a natural at bocce. He was competitive, and yes, he did like to win. That's not to say that he wasn't a gracious loser, especially when Elaine would regularly beat him at mini golf. At the end of the day, it was all fun. In June of this year, Normand and Elaine moved into the Overlook retirement community in Charlton.It is here that Normand passed away peacefully on October 12, 2021 at the age of 92. Taking a page out of Normand's life story, love generously and give thanks to God for all his blessings. He loved his family wholeheartedly, and they love him beyond measure. Normand is survived by: Elaine, his wife and partner of 67 years.Marc, his son, daughter-in-law Lisa, granddaughter Arianne (spouse Jimmy), and great grandson Ewan.Rene (Ray), his son, daughter-in-law Diane, granddaughter Kristina (spouse Mike), great grandchildren Julia and Matthew, grandson David (spouse Kate), grandson Kevin (fiancée Victoria), and grandson Jason.Michael, his son. Sisters Irene, Mildred and Theresa. And a big, beautiful family of brothers-in-law and sisters-in-law, nieces and nephews, and great nieces and great nephews. Normand is pre-deceased by his sisters Edna, Evelyn, Rose, Lillian and Rita, and his brothers Rene, Gerard, Ernest, Joseph and Albert. Funeral Mass will be celebrated Monday Oct.18 at 10:30 AM in St. Anthony of Padua Church 24 Dudley Hill Rd. Dudley, burial will follow in St. Anthony Cemetery Worcester Rd. Webster . In lieu of flowers, please consider a donation to the "Overlook Employee Appreciation Fund" at The Overlook, Attn: Accounting, 88 Masonic Home Road, Charlton, MA 01507. Bartel Funeral Home & Chapel 33 Schofield Ave. Dudley is directing arrangements. www.bartelfuneralhome.com