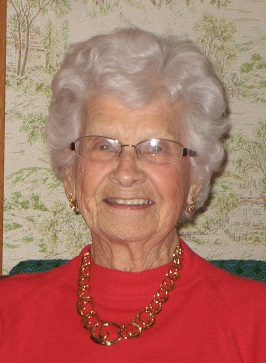 Please share a memory of Tessie to include in a keepsake book for family and friends.
View Tribute Book
Tessie M. (Godzik) Bielik, age 98, of Webster, joined her husband and daughter in eternal life on November 17, 2021. She passed away at home peacefully in her sleep. She is survived by one son, Paul F. Bielik III of Dudley, and one daughter, Mary M. Bielik of Webster, with whom she lived. She is also survived by her grandson, Brian P. LaLiberty of Dudley, and his father Ronald. She was predeceased by her husband, Paul F. Bielik Jr, who died in 2002, and her daughter, Patricia A. (Bielik) LaLiberty who died in 2019. She was also predeceased by her parents, John and Mary (Misiolek) Godzik, brothers Walter, Stanley, and Francis Godzik, and a sister, Florence (Godzik) Jolda. Tessie graduated from Bartlett High School and attended Pratt Institute in Brooklyn, NY. She also attended Becker Junior College in Worcester. She did secretarial work at Stevens Linen for many years prior to her marriage. She also worked in the family business, Grand Furniture Shops in Dudley. Most of all, she was a dedicated, loving, and devoted wife, mother, and grandmother. She enjoyed traveling to Europe and the Caribbean. She enjoyed summering at Windi Haven on Webster Lake and at Harborside Village in Wellfleet on Cape Cod. She enjoyed cooking and spending precious time with her family, especially her grandson Brian. She was a member of St. Anthony of Padua church in Dudley. She was past president of the St. Anthony of Padua Woman's Club, a member of the Webster Woman's Club, the Emblem Club, the Serra Club of Southern Worcester County, and an honorary director of the Hubbard Regional Hospital Guild. She was also a volunteer at the Hubbard Regional Hospital gift shop, as well as a member of Catholic Charities and the Webster Historical Society. In lieu of flowers, donations can be made to St. Anthony of Padua Church, 24 Dudley Hill Rd, Dudley, MA 01571. There will be a family greeting from 9:00-10:00am, with a funeral mass at 10:00am on 11/27/21 at St. Anthony of Padua Church in Dudley, MA. The burial will be private and at the convenience of the family. Bartel Funeral Home and Chapel in Dudley is handling the arrangements.
To send flowers to the family or plant a tree in memory of Tessie Bielik, please visit Tribute Store
Saturday
27
November

Look inside to read what others have shared
Family and friends are coming together online to create a special keepsake. Every memory left on the online obituary will be automatically included in this book.
View Tribute Book
Share Your Memory of
Tessie
Upload Your Memory View All Memories
Be the first to upload a memory!
Share A Memory
Send Flowers
Plant a Tree